(Press Release) Christie’s set Art market history with its Post-War and Contemporary Art evening sale, which totalled $852,887,000, with strong sell-through rates of 97% by value and 94% by lot. The sale featured a range of superlative works from distinguished private collections and institutions, such as the Cy Twombly Foundation, the Linda Pace Foundation, The Bergman Collection, and the Lisa de Kooning Trust. The majority of the works offered have been featured in one or several museum exhibitions and almost half of them were completely new to the market. The sale established 11 new world auction records, selling 3 works for over $50 million, 23 for over $10 million and 69 for over $1 million. 38% of lots sold above the high estimate, and 43% of lots sold within the pre-sale estimate range. Two additional sales, the Day Sale, and an online-only auction will complete this week’s sales series.

Achieving a world auction record for the artist at $30,405,000 (£19,155,150/ €24,324,000) after a 4-minute bidding battle between 4 collectors, Ed Ruscha’s Smash was an early example from the 1960s of one of the artist’s revolutionary word paintings, a body of work which established him as one of the most innovative and influential painters of his generation.

Contemporary Art has achieved $460,268,000 at Sotheby’s so far this week, including works by Rothko, Diebenkorn and Lucio Fontana from The Collection of Mrs. Paul Mellon sold last evening for a total of $116.6 million. Tonight’s auction saw a sell through rate of 85.9%, marking the 13th consecutive Evening Sale of Contemporary Art at Sotheby’s New York with a sell-through rate of over 80%.

The sale was led by Mark Rothko’s No. 21 (Red, Brown, Black and Orange) from The Schlumberger Collection which was sought by five bidders before selling for $44,965,000 to applause:

distinguished collectors and benefactors Pierre and São Schlumberger, for over 40 years and was last seen in public in 1970.

Jasper Johns’ 1983 Flag is among the most recognizable works of American Art and sold tonight for $36,005,000 to set a new record for the artist at auction after an extended contest between six bidders (est. $15/20 million): acquired from the artist in 1983, the year it was made, and has remained in the same private collection since. 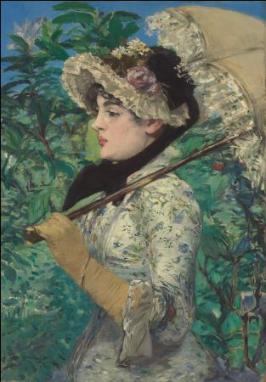 The J. Paul Getty Museum in Los Angeles is the new owner of Edouard Manet’s Le Printemps (Springtime), sold at Christie’s New York Wednesday night for$65,125,000 (£41,028,750 / €52,100,000) after an epic bidding battle between private and institutional clients from the Americas, Europe, and Asia. The price set a new auction record for any work by Manet, nearly doubling the artist’s previous auction record of US$33.3 million, set in 2010. Of the 30 paintings that Manet exhibited at the Paris Salon of 1882 over the course of his lifetime, Le Printemps was the last remaining in private hands. Proceeds from its sale will benefit a private American foundation supporting environmental, public health and other charitable causes.

Impressionist and Cubist works proved particularly appealing to clients this season, with 100% of the sale’s Impressionist and Cubist offerings sold — an indication of heightened interest in this movement as well as the great rarity of the works offered.  The Cubist selection was led by a collection of three works from the Melamed Family Collection, which totaled $10,151,000, including: 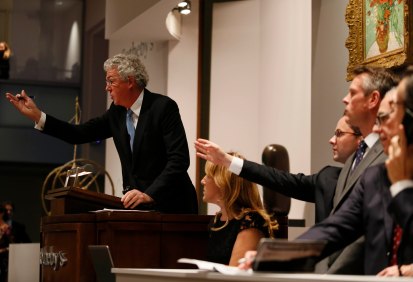 The Evening Sale totaled an exceptional $422.1 million, marking the highest total for any auction in Sotheby’s history.     Alberto Giacometti’s legendary Chariot is the second sculpture in auction history to cross $100 million, achieving $100,965,000, the second-highest auction price for the artist, and second-highest price for any sculpture at auction. One of only two casts remaining in private hands, which has remained in the same private collection for more than four decades. Sotheby’s holds the reigning world auction record for Giacometti as well as for a sculpture by any artist, set at Sotheby’s London in February 2010 by the artist’s L’homme qui marche I, which sold for $104.3 million.

Amedeo Modigliani’s totemic goddess Tête established a new world auction record for the artist, selling for $70,725,000.   Never before offered at auction, and one of few examples from the series remaining in private hands, breaking the artist’s previous auction record of $69 million, set at Sotheby’s in 2010 by the canvas Nu assis sur un divan (La belle romaine).

Three works by Claude Monet from a Private American Collection totaled $61.9 million, led by Alice Hoschedé au jardin from 1881 that achieved $33,765,000 million – a new auction record for a portrait by the artist. Vincent van Gogh’s Still Life, Vase with Daisies and Poppies fetched $61,765,000, marking a new auction record for any still life by the artist, as well as the highest auction price for Van Gogh since 1998.

A key new benchmark price achieved as eight bidders drove Piero Manzoni’s monumental Achrome well beyond pre-sale expectations to £12,626,500 / $20,249,118 / €15,872,822 (est. £5-7m) – establishing the highest price across all the Frieze auctions this week. The painting was the star lot at Sotheby’s auction of Italian Art this evening which established a grand total of £41,406,650 / $66,403,845 / €52,052,461 – the highest ever total for an auction of 20th century Italian Art. Alongside Manzoni, works by Castellani, Bonalumi and Simeti (all white) nearly doubled the previous records for the artists. All three works came from Giobatta Meneguzzo’s collection and were sold to benefit his museum, the Museo Casabianca. During the Contemporary Sale, a new record was set for one of the founding fathers of the ZERO movement Heinz Mack, when Die Vibration der Stille sold for £302,500.

The Post-War & Contemporary Art Evening Auction realised a total of £40,344,500 selling 89% by lot and 94% value against a pre-sale estimate of £32.1 million – £47.1 million. Record prices at auction were established for 5 artists (such Joe Bradley, Rachel Whiteread, Toby Ziegler and Louis Eisner).

Francis Outred, International Director and Head of Post-War & Contemporary Art, Christie’s Europe: One of the most packed auction rooms I have ever seen witnessed a landmark October auction series, which, for the first time, approaches the importance of our February and June auctions. We saw a record for an Evening Auction in October and a record for the Italian Sale. Achieving a total of £114million over three auctions, this October series doubled our previous record of £57.4million last year and was a testament to the power of Frieze week. Our record Italian Sale, which set a new record for Alighiero Boetti, shows the increasing strength of Italian art, a field in which Christie’s has seen a decade of dominance. In the spirit of Frieze week, the exciting younger generation of painters made a strong debut at our Evening Auction, with record prices for artists such as Joe Bradley, Toby Ziegler, Brent Wadden and Louis Eisner. Strikingly, works by Gerhard Richter made 4 of the top 10 prices at Christie’s tonight, which shows Richter’s continued influence on younger artists and his enduring relevance to painting today.

– Waldstück, 1969 (estimate: £3,000,000 – £5,000,000), which is one of Richter’s three large-scale paintings capturing the heart of the Chilean rainforest, sold for £4,450,500. this work has remained in the same hands for nearly forty years and dates from a breakthrough moment in Richter’s career coinciding with his first New York exhibition at the Guggenheim Museum.

Mariolina Bassetti, Chairman Christie’s Italy: Building on the success of last years’ Italian sale and of the single owner auction ‘Eyes Wide Open: An Italian Vision’ in February 2014, which made 14 artist records, we are proud to maintain our status as market leaders in Post-War Italian art. The 14th edition of Christie’s Italian Sale realised a total of £27.5 million, smashing the previous record for the category. Over the years, the Christie’s team has built the strength of the Italian Sale on strong foundations of art historical research and curatorial values. The Italian Sale continues to offer exceptional works from Italian modern and contemporary art, which continues to attract an increasingly international audience. We are pleased that the group of works by Alighiero Boetti realised a combined total of £4.8 million and that the Private Collection ‘Mapping Modern Art in Italy’ achieved such a strong result of £8.3 million. The numerous record prices set tonight prove the gradual and healthy growth of the Post War and Contemporary Italian art market, from artists that are relatively new to the auction house market such as Paolo Scheggi and Marinoa Apollonio to the most significant sculpture by Alighiero Boetti’s entitled Colonna, which set a world auction record for the artist.

“At the starting line of an extensive fall season we are very pleased to have launched our European Headquarters with an Evening Auction which took place in a packed sale room and which saw many strong prices. Since the opening of our space at 30 Berkeley Square last week we have seen early signs of great promise ahead having welcomed an average of 1,000 visitors a day to our exhibitions and with almost a third of this evening’s bidders being fresh to Phillips.” Michael McGinnis, President, Phillips.

“With records for Tauba Auerbach, Danh Vō, and KAWS we have once again started the week of Frieze auctions with real energy. The animated bidding in the room that saw strong prices for Banksy, Anselm Kiefer and Alex Israel was a continuation of the momentum we have felt all week with the opening of our European Headquarters.” Peter Sumner, President, London.

Soon on AMT.. I will be there!

Budapest is about to have its first “gallery weekend” mid-September. ArtGuideEast asked Gábor Rieder chief organiser of GWB about the initiative, their plans and the program itself.

ArtGuideEast: Who initiated the idea of the first Gallery Weekend Budapest?

Gábor Rieder: The original idea was born when I discussed new possibilities with gallerist Ani Molnár who was then the president of the Association of Hungarian Contemporary Art Galleries, in early January 2014. This idea  had been circulating among the gallerists of Budapest for many years, but there were no professionals to manage the event. We have just founded a new non-profit initiative, the Creative Platform Contemporary Art Foundation, in order to organize special contemporary art projects originally related to the magazine publishing. (At that time I was the chief editor of Flash Art Hungary, since then the magazine has ended thanks to unworthy political business.) Then…

The power of China Poly Culture has identified its next Western prey in Bonhams, the historical British auction house with over 200 years of history. As part of the group owned by the Chinese Government, Poly Group, Poly Culture is one of the leading auction houses in Asia which in March, made ​​its debut in the Hong Kong Stock Exchange.
Owned by the Dutch collector Evert Louwman, Bonhams earlier this year had already started to looking for buyers, and will now will be sold for a figure of which we still do not know the amount, probably some hundreds of millions of pounds.
Recently, another major news involved the English house and the Asian area: the former director of Art Basel Hong Kong Magnus Renfrew has become director of Bonhams Asia, to redefine the strategy of the company in the Eastern area, perhaps already in the perspective of the great plan of acquisition by Poly Group …

Launched on August 4th, Global Art Agenda is an innovative app developed by the French company NetDevices, with an agenda and a clever set of tools to allow the art lovers to be constantly updated on what’s happening in the art world.

The App is available in French and English for free on the App Store and on Google Play. It presents an ever-growing selection of the most significant international art events, comprising an Art Travel Guide and a Global News sections.

40 major fairs have already joined the app: Global Art Agenda covers all the key art domains and collects essential information about the significant fairs and biennials around the globe. Also, users can discover in preview a selection of galleries and of their artworks on display. Moreover, art lovers can plan their trips, finding a selection of high standing hotels, restaurants, bars & clubs etc.

Global Art Agenda offers a selection of Global News, introducing interesting articles from media partners, leading actors in the art and culture fields. Art lovers can also share information (notes, photo, articles…) and can keep track of relevant documents in their notes as maps, meeting memos and photos with Evernote.